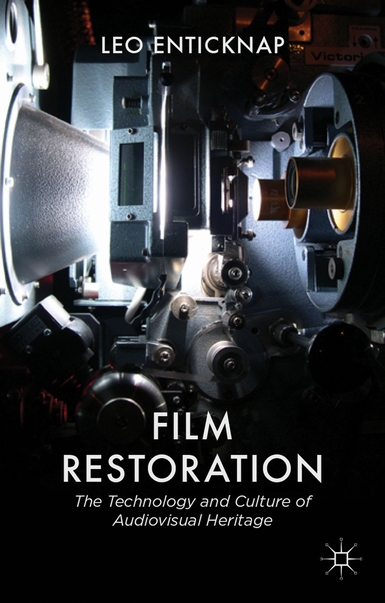 Having trouble opening this file?

This book was researched and written between 2009 and 2012, and published by Palgrave Macmillan in November 2013.  It argues that a great deal of confusion and misunderstanding exists between professional film preservation and restoration practitioners, academics and the general public as to what the process of restoring archival moving images involves, what its objectives are, and the evidential status of “restored” films.

In this book I try to clarify this confusion, and call for coherent and objective understanding as to what a “restored” film is and isn’t.  The book’s essential argument is that a recorded moving image sequence is an historical source artefact just like any other (e.g. a written document, a work of fine art or a photograph), and that the approach we should use to understand what it does and doesn’t tell us should essentially be the same one that is used in other forms of modern historical research.  How was the movie initially created, why, where, and by who?  What happened to it after it was initially made?  Why was the intervention called “restoration” done, when, where, how and by who?  How does the audience for the “restored” version differ from that of the initially produced version(s)?

The introductory chapter argues that fundamental problems exists in the way academic film studies tries to understand the role of moving image technologies, and that these misunderstandings have caused untrue and misleading claims to be made about technology in general and film restoration in particular in their writing about the subject. Using examples of factually incorrect and/or culturally unsustainable arguments made about the role of technology in cinema published by a number of film studies academics, I propose that a critical mass of scholars who have no professional experience or qualifications in any science or field of engineering have tried to circumvent that problem by looking for cultural metaphors to explain the significance of the new generation of moving image technologies that have emerged since the early 1990s (principally computer-mediated, or digital, moving images).

As a general rule, the ones they have come up with fail to take account of the practical capabilities of these new technologies, and in some cases ascribe capabilities that do not actually exist. The second part of the introduction compares this body of film studies literature to the professional literature that has emerged from the moving image archiving profession over the same time period. It argues that this body of work offers more in the way of technical literacy (as you would expect from the work of actual practitioners), but in a cultural sense is largely restricted to an attempt to document and further the technique of film restoration itself. In conclusion, I propose that in order to explain the cultural significance of the practice of film restoration, it is necessary to combine a film archive professional’s understanding of the technology and techniques with an historian’s attempt to understand how the use of them has affected the evidential status of audiovisual records of human activity in the past.

1 – Why do Films Need to be Restored?

This chapter begins by examining the concept of originality, in an empirical sense, in relation to the question.  It argues that in cinema there is no such thing as originality, directly comparable to that in other forms of cultural production, notably works of fine art and written documents, and for two reasons.  Firstly, the copying of photographic images and audio recordings is a fundamental and inherent part of the production, post-production and distribution processes.   Secondly, authenticity can be determined by a more diverse range of criteria than individual authorial intent, even though film criticism from the mid-c20 onwards tends to privilege this in its cultural value judgments.  A restorer, therefore, has first to determine in what form the film is considered authentic.  The second half of the chapter considers the principal reasons why a film may not survive in that form.  This is divided into physical loss (chemical decomposition of the film base, physical damage to the film base, loss of color information and format obsolescence) and political loss (outright loss of entire films, poor quality or orphaned surviving elements, incomplete surviving elements and modernization, i.e. modification of the image and sound without regard to authenticity).

2 – Where Are Films Restored?

This chapter outlines and discusses the work of the institutions and individuals that do the work of film restoration.  The principal sections compare and contrast the work of public sector and commercial archives, arguing that the role of the former has traditionally been privileged in standard histories of the film archiving movement, notably Anthony Slide’s Nitrate Won’t Wait (1990) and Penelope Houston’s Keepers of the Frame (1994).  I suggest that public sector and commercial archives tend to have differing priorities in their selection of titles for restoration and the objectives of the work itself.  Other sections discuss the work of the service sector (commercial entities that produce and supply the products and services used in the restoration process, e.g. laboratories, post houses and the manufacturers of equipment and consumables), private film collectors and the “auteur archivist” – prominent restoration practitioners who develop specialities around the work of certain filmmakers or technologies, e.g. Kevin Brownlow and Robert Harris.

A trailer for the 2012 restoration of Wake in Fright, one of the case studies discussed in my book. Shoot me kangaroo up, sport!

3 – The Technique of Film Restoration

Chapter Three discusses the film restoration process itself.  The opening section covers the initiation of a restoration project – how films are selected for restoration and the decision-making that determines how the restoration is to be carried out and with what objectives.  A brief history of the technologies and techniques used in photochemical and digital restoration is provided, together with the film preparation and repair techniques that are common to both, followed by a critical comparison of the two methods.  Finally, the restoration of film soundtracks is covered, including the re-recording of tracks that were created using now obsolete systems, noise reduction and remixing.  The workflow coverage within this chapter emphasises the distinction between initial work on the source artefacts (e.g. film cleaning and physical repair of damaged perforations), the duplication process itself and the post-production functions used to manipulate the aesthetic characteristics of the copied image and produce the final outputs needed for distribution and exhibition.

4 – The Presentation of Film Restoration

Chapter Four covers the three principal means by which restored films reach their audience: theatrical exhibition, television broadcast and consumer media for viewing in the home.  It argues that significant technical challenges are presented by each of these in communicating the authenticity of a restored film.  These include the reproduction of obsolete aspect ratios, silent film frame rates and audio formats in theatrical projection, their equivalent issues in telecine transfer to standard definition video, notably the practice of “panning and scanning” and the frame rate incompatibilities inherent in the PAL and NTSC television systems, and the use of lossy compression in the encoding of consumer digital media.  In conclusion, I argue that broadcast and consumer media has become the principal means by which the results of film restoration reach the viewer, but that careful understanding of the material changes that take place in reformatting is needed.

5 – Conclusion – The Study and Ethics of Restoration

Taking as its starting point the contention that “multiple editions destabilize texts,” the final chapter begins by examining the ethical positions that have evolved within the film archiving profession in relation to restoration, arguing that they translate into some quite specific – and, from an historian’s perspective, not always sustainable – notions of originality and authenticity.  It proposes that the transition of photographic film from a current to an obsolete medium is almost complete, and that when restorations based primarily on photochemical duplication are made impossible by the cessation of the manufacture of film stock and its related chemistry (which, in the case of substantive coupler color film, is likely to be within a few years of the time of writing), archivists will be forced to reconsider their traditional emphasis on the technical properties of surviving film artefacts and the long-established cultural definitions of originality (most notably the emphasis in film studies on the director as creative force) as the main sources of their ethical principles.  In conclusion, I note that this is an issue that historians and historiographers have had to cope with for a long time, and that the object of restoration will never again be as simple to define as has thus far been assumed.

This appendix contains paragraph-long explanations of 158 terms and acronyms that are specific to film archiving and restoration, moving image technology in general (where relevant) and academic film studies.  Where necessary, the distinction between their formal, technically precise meaning and their colloquial use in professional practice and/or the wider public is explained fully (e.g. in the entry for telecine).  Where a term is used to mean different things in film restoration practice and humanities academia, two separate entries are provided, as in those for source (film restoration) and source (historical study).  Where different terms are used to mean the same thing in US and British English, this is noted and cross referenced, as in grading (British) and timing (US).  The purpose of this glossary is not simply to provide a reference point for readers without a technical background in film and/or digital imaging (though it is hoped that will serve as such), but also to clarify ambiguities that have crept in to the everyday use of many of the technical terms used in the main text.

Please feel free to comment on this page below, or to contact me if you have any comments or queries.  This main text of this page was last updated on February 3, 2014.