Since the first version of this site went online in 2006, I have received frequent enquiries via the contact form about the origins and history of the name Enticknap, either from other Enticknaps themselves or people who knew them.  The following article is based on genealogical and other research carried out by members of my family, in the hope that that it will answer your questions on the subject preemptively. If it doesn’t, please feel free to comment or contact.

The name in its current form has its origins in a very small patch of south-eastern England, centered around the village of Dunsfold, near the border between the counties of Surrey and West Sussex.  An area of woodland within the parish of Dunsfold called Enticknap’s Copse can be visited today. This area is now effectively an outer suburb of London, sometimes nicknamed the “Surrey Stockbroker Belt” in reference to its pretty rural scenery and the high cost of living there.  Within about a 15-mile radius of Dunsfold, you are probably in the only part of the world where having the name Enticknap is not at all unusual, and you will not be asked to spell it! 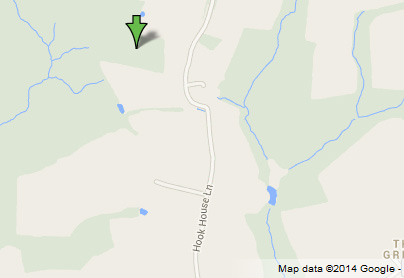 Dunsfold and its environs was a very different place when the first Enticknaps arrived on the scene.  It was an entirely rural, agrarian society, and if anyone did travel beyond the next village, it was usually to Godalming or Guildford, and very rarely as far as London.  The earliest written evidence of any Enticknaps is in property deeds surviving from the thirteenth century.  The name in those days was de Anekecneppe – literally, “of Anecke’s hillock”.  This place name has not survived: it must have been in Hambledon, a parish lying just to the north-west of Dunsfold.

De Anekecnappe was at this stage not a surname in the modern sense, passed on from parent to child and identifying a given family, but an indication of where the bearer held property. If the property owner moved out, their name changed; if another moved in, they adopted the name. So the persons named in these early deeds are not the ancestors of today’s Enticknaps. I believe the first “real” Enticknap was the Thomas de Anteknappe of Hambledon, who paid tax in 1332. He was reputedly not born an Enticknap, but was probably the ancestor of later Enticknaps, as it was around the mid-14th century that surnames became hereditary. This Thomas was the only Enticknap taxpayer in the whole of Surrey at this time. The tax he paid was minimal; he was only just wealthy enough to have to pay it, and if there were any other Enticknaps living in the same area at this time, they fell below the threshold of liability. So the Enticknaps were at the lowest level of the property-owning class in the early 14th century.

Although the name originated in Hambledon, the richest Enticknaps in historical times lived in the parish of Chiddingfold, in a hamlet called Pockford (which is close to the parish boundaries of both Hambledon and Dunsfold). Enticknaps are first found in Chiddingfold just after the middle of the 14th century (by this time the surname had become hereditary, so it survived the migration from Hambledon, and the “de” prefix disappeared). The acquisition of the Pockford estate came several generations later, in the third quarter of the 15th century. During the period from 1332 to the 1470s the Enticknaps had prospered, grown wealthier and established themselves as yeoman farmers who mixed with the highest ranks of society. One of them, a John Enticknap, who I believe may have been the son of the first Enticknap yeoman of Pockford, became a servant in the household of the heir to the throne, Prince Arthur, shortly afterwards (in 1491), and subsequently became Janitor of the Castle of Flint, a royal appointment.

The name was still usually spelled with an “A” as the first letter; “E” gradually supplanting “A” from the beginning of the 16th century. Although Enticknap is the most common spelling of the name today, it is not the only one: there are a few Entiknaps and Enticknapps. The name is pronounced exactly as it is spelt, with a slight emphasis on the first syllable.

There are two attractive myths about the early days of the Enticknaps; regrettably there is not a shred of evidence to support either.

The first is that Enticknaps fought on the losing side on the Norman Conquest. It is possible that people from the place called Anekecnappe did fight there, but there is no record anywhere that they did. And if they did, they would not have been the ancestors of today’s Enticknaps.

The second is that Alfred the Great granted a charter to the Enticknaps of Pockford. This is certainly untrue. As stated above, the Enticknaps did not acquire their Pockford estate till the 15th century, six centuries after Alfred reigned. In any event, the modern surname system had not developed in Alfred’s time; virtually every Saxon listed in the Domesday Book had just a single name. So this myth contains not one but two anachronisms to rival Shakespeare’s clock in Julius Caesar’s Rome.

This myth was always extremely implausible and it is surprising that it has gained the currency it has. The charter is said to have been in the Sadler Collection (of documents accumulated by the Pockford family – this collection is now held by the Surrey History Centre). It isn’t there now – why not? Surely such an important document would have been treasured with or even more than the rest? Also, it is unbelievable that King Alfred would take time off from fighting the Vikings to assign a relatively small and unimportant property to a relatively unimportant family in Chiddingfold, a location so unimportant it does not even feature in Domesday.

Middle Ages to the Industrial Revolution

Between the thirteenth and eighteenth centuries, Enticknaps appeared in many of the neighbouring villages, with notable presences being established in Chiddingfold, Lurgashall, Roundhurst (a hamlet in the northern part of the parish of Lurgashall, not usually named as such on modern maps, and situated in Haslemere for postal address purposes) and Petworth.  There were still not many of us at this stage, though: by 1700, only three nuclear families consisting of a total of 30 adults with the surname are known to have existed.  Between the fifteenth and nineteenth centuries Chiddingfold was arguably the Enticknap epicenter, as illustrated by the numerous plaques on the walls of the village’s church.  Chiddingfold was home to the wealthiest landowning Enticknaps, and during this period its parish registers consistently list more of them than were living in any other settlement.  A tourist guide to the area published in 1937, South-West Surrey: Highways and Byways (by Eric Parker, London, Macmillan), states (p. 168):

In the church, which stands among trees, with an air of large solidity a little graver than the small, shingle-spired churches of the other two villages, are tablets to the memory of a number of Enticknaps, described sturdily as “yeomen,” of Upper Dunce, Pockford, and Gorbage Green, which appears on the maps in the plainer form of Garbage Green.  Enticknap is a good Surrey name today, and there were Enticknaps in Chiddingfold at the [Norman, in 1066] Conquest.  The parish registers are full of Enticknaps; in one century there were fifty burials in the family in Chiddingfold churchyard.  [This text is in the public domain in the USA, where this website is published] 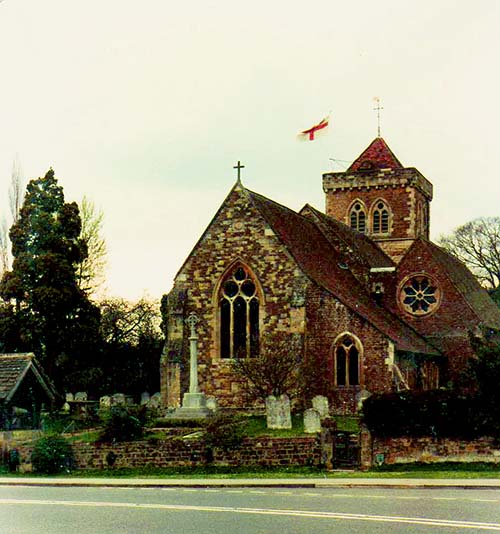 The Roundhurst branch became noted blacksmiths.  Between 1813 and 1950, census records reveal Enticknap blacksmiths to have worked in at least 28 towns and villages in the south east of England, most of them in Surrey and Sussex.

Roundhurst Forge, West Sussex, where Enticknap blacksmiths worked between the late 1780s and 1950.  Although disused when this photo was taken in 1980, the bellows still worked. It is located at 51°3’47.43″N 0°40’40.138″W, or SU927301 on the British National Grid. Please note that this building is now a private residence (the forge itself has since been converted into an apartment) and cannot be visited by members of the public.  Photo © Nicholas Enticknap, 1980, used here with permission.

The Enticknaps have been a remarkably local tribe for most of their history, and did not start to move away from their ancestral stomping ground in significant numbers until the early twentieth century.  166 Enticknaps are listed in the 1851 census, and have all been traced back to nine common ancestors.  Eleven Enticknaps were killed in action during World War I, all of them from the south-east of England.  Today, we estimate that there are currently around 700 Enticknaps living in the UK and another 100 or so expats.  Put another way, there is approximately one Enticknap for every 71,000 of the population of England and Wales.  Enticknaps are to be found worldwide: we have evidence of them living in France, Germany, Hong Kong, Ireland, Kenya, New Zealand, The Philippines, Romania, Singapore, Thailand and Vietnam.  I am, to my knowledge, one of about twenty American Enticknaps.  There is an Enticknap Park in Leeton, New South Wales, Australia, which I’m guessing (please comment or contact if you can confirm or refute this) is named after George Enticknap (1894-1976), Minster of Transport in the New South Wales legislature from 1956-60 – probably the most senior political office that any Enticknap has been elected to, and the only Enticknap so far to have become famous enough to have a Wikipedia page!  He was the grandson of Ambrose Enticknap (1830-88), who was born in Godalming and emigrated to work in the gold fields of Victoria around 1855. High profile Enticknaps alive today include Tyler, a Motocross racer, and Rupert, an opera singer.

But despite having made it to the other side of the world, the name remains closely linked to the region of its ancestral origins.  Google “Enticknap” today, and a large proportion of the individuals and businesses that will appear are still based within a short distance of Dunsfold.

Please feel free to comment on this page below, or to contact me if you have any comments or queries.

54 thoughts on “The Name Enticknap”